Lake Mburo National Park is Uganda’s smallest savanna park (370 sq km) lies enroute from Kampala to Bwindi. A mosaic of habitats including open water, wetland, grassland, woodland and forest patches supports a diverse population of herbivores including species such as impala, zebra, eland and topi that are rare or absent. 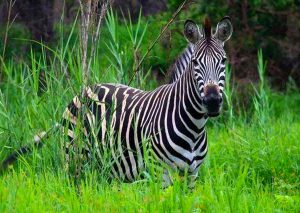 The Activities to do in Lake Mburo National Park

Rwonyo is the centre for tourism activities in the park. The Rest Camp is the starting point for nature walks while an interpretation Centre on the hilltop behind the rest camp describes the park’s history and biodiversity.

Guided walks explore the park around Rwonyo, culminating in visit to a natural salt lick frequented by wildlife. Viewing is facilitated by a timber observation platform.

The eastern hinterland of Lake Mburo is served y a network of game tracks along which a variety of savanna animals and birds can be sighted. Impala are the most commonly seen along the Impala Track while zebra frequent the grassy valley floors traversed by the Zebra Track. This connects to the Ruroko Track which passes rock Kopjes that are home to the elusive klipspringers. In the south of the park, the Lakeside Track passes dense woodland home to gush buck and bush duiker to Kigambira Hill which provides a panoramic view of Lake Mburo. This lake and seven more can also be seen from the Kazuma Hill lookout close to the Kazuma Track.

The eastern shores of Lake Mburo can be explored by boat, departing from a jetty at the lakeside campsite near Rwonyo. Watch out for crocodile and hippopotamus during the 2 hour voyage, as well as birds including pelicans, heron, cormorant and fish eagle and perhaps even the rare shoebill stork. Fishermen with their own equipment may fish in the lake from the campsite by arrangement.

Horse Rides in the Park