Some of the Best Places to Track Chimpanzees in Uganda which has over 5000 primates at different safari destinations like Kibale forest national park, Budongo forest, karinzu forest, Kyambura gorge and Ngamba island where you will find rescued chimpanzees in a netted fence.

Chimpanzees share 97% DNA with human beings and belong to the Hominidae family together with mountain gorillas and orangutans. Chimpanzee tracking in Uganda usually comes along with other opportunities to meet other primate species in the wild, most of the forests host various primates as well as birds, its rare to fail to spot more than two bird species while tracking chimpanzees. chimpanzee tracking comes along as a supplement for a gorilla safari in Uganda.

In Uganda, there are several Best Places to Track Chimpanzees in Uganda and these are: 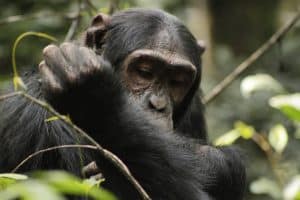 Kibale forest national park is a moist green forest named the primate capital of the world with over 1500 chimpanzees. Kibale is covered with interspersed thatches and trees some of them are as tall as 55 forming a canopy, the park also includes a shade of herbs shrubs and ferns and swampy areas, about 351 tree species have been registered in the park.

Kibale forest the Best Places to Track Chimpanzees in Uganda is not only home to chimpanzees but also a quite number of other 13 primate species that makes it a primate capital world, these primates include L’Hoest’s endangered red colobus monkey, black & white colobus, red-tailed monkey, blue monkey, olive baboon, grey-cheeked mangabey, bush baby and potto, vervet monkeys among the other primates. Other mammals also present are buffalo, forest elephants, bush pig leopard though they are rare to spot apart from duiker.

A neat viewer could also see amphibians and reptiles and a colourful variety of butterflies as well a variety of bird species like African pitta, black bee-eater, Abyssinian ground thrush, yellow spotted nectar, little greenbul, black-eared ground thrush, yellow-rumped tinkerbird, blue-breasted kingfisher, along with the crowned eagle among others.

Kyambura gorge is a stunning escarpment valley within Queen Elizabeth national park, kyambura gorge is broad about 100 meters deep, swarmed with the rich biodiversity of birds, mammal species as well primates including chimpanzees. 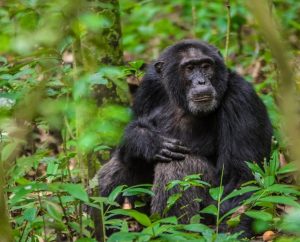 Budongo forest is the largest mahogany forest in Uganda on your way approaching the largest conservation area, Murchison falls national park. The mahogany dominated forest is home to various wildlife species including chimpanzees, once, in a while, lions and leopards will be spotted in this large forest. Budongo the Best Places to Track Chimpanzees in Uganda has a record of more than 360 bird species, 465 trees the largest concentration is mahogany and 24 mammals, of which 9 are primates.

Karinzu forest the Best Places to Track Chimpanzees in Uganda is home to not only chimpanzee but also other primate species which include black and white colobus monkeys, red-tailed monkeys, l’hoest monkeys, baboon, pottos and Galagos to mention but few, the forest also harbours 378 Species of Birds among them the Great blue turaco, Yellow-spotted Nicator, African pitta, Blue-headed Sunbird, African finfoot, black-billed turaco among others. Kalinzu forest is under the private management of national forest authority and chimp permit cost Usd 60.

The island is surrounded by Lake Victoria, covering 40 hectares, 23 km away on the water, the sanctuary is a project of the Chimpanzees Sanctuary and Wildlife Conservation Trust (CSWCT) established in 1997 to shelter over 40 rescued orphaned chimpanzees which may be impossible to return in wild in their natural setting.

While it’s not the same experience trekking through the tropical rainforest it’s worthwhile taking time to observe these vulnerable creatures behind their cages and study their behaviours. Humans are confined 40 hectares as the chimps wonder all over the forest back and forth to feed in a netted electric face where visitors take time to see them on a raised platform.