Lionesses, female lions, give birth to cubs away from the pride. Typically a lioness will have between one to four cubs in one litter. Since cubs are born completely helpless, she keeps them hidden from all animals, including her own pride. Cubs don’t even open their eyes until 3-11 days of age. When the cubs are about eight weeks old, she finally introduces them to her pride.

Many of the females in a pride give birth around the same time, so they have cubs of a similar age. This makes it natural for them to care for, protect and feed each other’s young. In fact, the lionesses in a pride will often nurse other lionesses cubs. It is truly communal care. 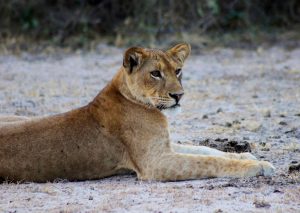 The skill of hunting is one every lion must possess. It means the difference between eating and starving. Contrary to popular opinion, lionesses are not the only hunters in the pride, so male cubs must also learn to hunt. Hunting training begins around three months of age. Although cubs still nurse this young, the lionesses take them to eat after the kill.

One of the most important jobs of a lioness is to protect her cubs. Depending on the conditions, 40-80% die before turning one. There are two reasons for this: starvation and coalition invaders.A coalition is a group of ousted male lions from another pride. Their main goal is to find a pride of females. When they do find a pride, they must first fight the existing males. If they succeed, the coalition then goes after the cubs.

It is thought that the lions kill the cubs so the females will mate sooner and their genes will be carried forth. The lionesses, however, do everything they can to protect their young. They will fight to the death, sometimes, and gang up on the intruding males. Although they cannot defeat the larger cats on their own, the group does sometimes succeed when working together.

There quite more amazing fact stories about different creatures in the wilderness. Planning on your next safari tour???? wildtravelsafaris.com is here for you. We are ugandatravelsafaris.com