What are the Shoebill Birds that are seen in Uganda 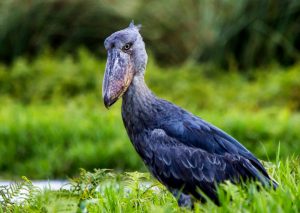 What are the Shoebill Stork Birds that are seen in Uganda?

A Shoebill (Balaeniceps rex) commonly known as Bulwe in Luganda, it’s a large stork bird found in undisturbed wetlands of Africa (endemic to Africa) like Uganda, Sudan, Ethiopia and Rwanda once seen in Burundi.

It’s long about 128cm weighing about 5-7kgs, both sexes are grey, pale grey eyes and long grey wading legs to enable them to stand in wetlands to get their prey, immatures are brown in colour.

The shoebill has a small raised crest and a big shoe-like hooked bill which helps it hook away its pray at the sides of its bill has a scissor-like which helps the bird squeeze and kill the prey, It holds Its wings in flight and can flap 150 times per minute It’s the first African bird of sought( a bird one should see before he dies) because it didn’t go through revolution and its believed to still be a nasal,

They are solitary birds feeding on lungfish, frogs, Nile monitors and baby crocodiles can stand still for about Five hours like a statue spotting for prey using its sharp vision with 60% success Shoebills are monogamous and breeds on ground flat nests made out of dry papyrus by both sexes hidden on floating vegetation, the females lay 1-3 eggs incubation are for 30 days done by female and looking after the chicks.

The female keeps food in gullet and gives it directly to the young one. Chicks begin flying at 112days, they are so sensitive to human beings when on the nest and can abandon if disturbed Maturity is gained about 2-3 years, it is interspecific for food in young ones and most of the times one chick grows or the first hatch pushes out the young ones from the nest for its survival,

It’s vulnerable and has a population of about 5000 to 8000 individuals, in Uganda it’s seen in Mabamba, Semlik wildlife reserve, Katonga, Murchison, currently sited in Kiryandongo

Fishermen believe this bird as a bad omen when they find this bird on there way to fishing they do never catch fish hence killing it however through sensitizations to these people, there is a reduction in killing the birds.