10 Best Travel Destinations in East Africa covers an incredible array of different countries, landscapes, cultures, and ecosystems. There is something for tourist: from “Walking safaris to tracking endangered mountain Gorillas.” 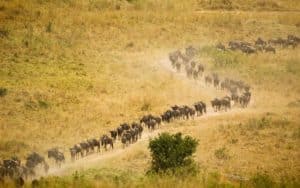 Regardless of the time of year, wildlife sightings are both plentiful and diverse. It’s possible to see the Big Five in a single day, and during the July-November dry season, the plains are filled with the vast herds of the annual wildebeest migration. In particular, watching the herds crossing the Mara River in their thousands is a spectacle few will ever forget. 10 Best Travel Destinations in East Africa Cultural visits to traditional Maasai villages are another highlight of this spectacular East African reserve. 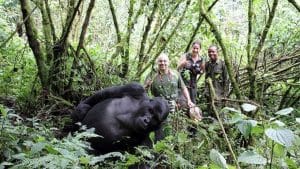 On the hills, lies one of the oldest and most biologically diverse rainforests on the continent. Dating back 250 000 years and home to over 400 endangered mountain gorillas, Bwindi Impenetrable Forest is an… unforgettable destination, which last year alone drew +40 000 trekkers. The national park itself is home to 120 mammals, including baboons, chimpanzees and elephants, and 350 #forest bird species. Named one of the Best Parks in Africa by CNN (2018), it’s also one of UNESCO’s… World Heritage Sites and a popular honeymoon destination.

Already one of the most favoured attractions in East Africa, Bwindi forest looks set to be even more popular after its feature in the Marvel blockbuster “Black Panther”.

Zanzibar is renowned for its fascinating history and its incredible beaches. Located off the coast of Tanzania and surrounded by the azure waters of the Indian Ocean, Zanzibar was once a key stop on the spice route. Here, the island’s Arab rulers.. would trade slaves for spices; and today, Zanzibar’s exotic past is evident in its elaborate architecture. Stone Town is one of the island’s biggest attractions, boasting ornate houses, narrow alleyways, a Sultan’s palace, and many mosques. Zanzibar’s white-sand beaches… are postcard-perfect, and its reefs are ideal for snorkelling and scuba diving. 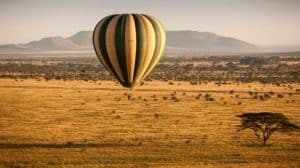 Those in search of the ultimate safari experience should consider combining a trip to the Maasai Mara with a visit to Serengeti National Park in neighbouring Tanzania. Here, breathtaking open plains are dotted with acacia trees… and grazing game. It’s a great place to spot predators like lion and cheetah in action; especially during the January-March rainy season. At this time, wildebeest descend upon the southern Serengeti to give birth, and the newborn calves make easy prey for hungry cats… In April, the herds start their migration to the Maasai Mara, but the game-viewing remains exceptional all year round. 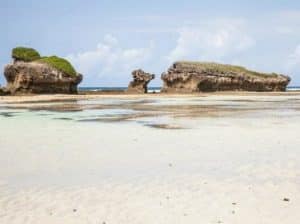 Unlike many of Kenya’s other beach towns, Watamu is still considered an enclave of peace and quiet. Located slap bang in the middle of Kenya’s exquisite coastline, Watamu is small, relaxed and full of history. It is best known for its stunning bays… and palm-fringed beaches and for its prolific coral reefs. Deep-sea fishing is a favourite pastime here, and several dive schools offer the chance to take up scuba diving. On land, beachfront restaurants serve fresh seafood, Mida Creek boasts stunning birdlife, and Gedi Ruins…offers an insight into the life of the 13th Century Swahili people. 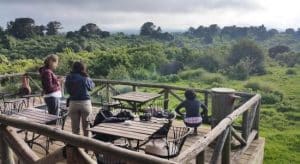 Tanzania’s Ngorongoro Conservation Area is dominated by the ancient Ngorongoro Crater. Approximately 1,970 feet/ 600 meters deep, the crater is the world’s largest intact caldera, and one of East Africa’s most incredible natural… spectacles. Within its rim, countless animals range across the grassy plains of the crater floor, including a significant population of critically endangered black rhino and some of the largest remaining tusker elephants. Black-maned lions are another…impressive sight, as are the flocks of flamingo that appear on the crater’s soda lake during the breeding season.

The highlight of this Rift Valley park is the eponymous Lake Nakuru, a soda lake famous for its incredible flamingo population. The density of the flamingo flock depends on the time of year. During the dry season, water levels fall…and the lake becomes more alkaline, generating more algae for the birds to feed on. At this time, numbers of lesser and greater flamingo can swell to as many as two million birds, creating a rose-hued haze across the lake’s surface. The park itself is home to a host of other animals, including lions, rhino and approximately 450 species of bird. 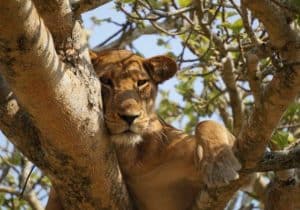 Queen Elizabeth NP is undoubtedly the most visited / popular national park in Uganda. The park was nicknamed ‘A Medley of Wonders’ because of its exceptional scenery that forms up the panoramic views of its wilderness. This park harbours a lot of wildlife but is mainly common for its a big population of tree climbing lions that reside it the Savannah plains of the Ishasha sector.

Activities carried out in Queen include; Game Viewing in Ishaha and Kasenyi Trails, Chimpanzee Tracking… in Kyambura Gorge, Birding and launch trips on Kazinga channel but over 95% of its safaris are wildlife safaris. We highly recommend Queen Elizabeth National Park as the best place for wildlife safaris in Uganda. 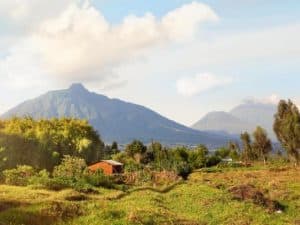 Draped in mist and full of lush vegetation, Rwanda’s Volcanoes National Park nestles deep within the Virunga Mountains. As Africa’s oldest national park, it is one of the best places in the world to encounter the critically endangered… mountain gorilla. A subspecies of the wider-ranging eastern gorilla, there are only around 800 of these amazing animals left. To share a moment with them in their natural environment is an intensely moving experience and one that should be at the top of any wildlife lover’s… bucket list. The park provides a home for several other rare species, including 29 endemic species of bird. 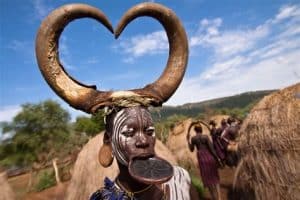 Part of Africa’s incredible Great Rift Valley, the Omo River Region is perhaps one of the most remote destinations in East Africa. However, those that are willing to make the long and difficult trip to get there will be rewarded with…incredible scenery, and the chance to visit villages that have remained unchanged for hundreds of years. There are many different tribes in this part of Ethiopia, and each one has its own traditional dress, culture and ceremonies. In order to get the most out of your Omo River…experience, it is advisable to join a tour, some of which combine cultural visits with white-water rafting on the region’s famous rapids.