The Black and White Colobus Monkeys of Uganda

The Black and White Colobus Monkeys of Uganda

The Black and White Colobus Monkey have the Alternative names of Colobus guereza, Black and white colobus. Their prefered habitat is in the Coastal, inland and montane forests. They are able to feed on a Diet of Leaves, fruits, flowers and twigs. 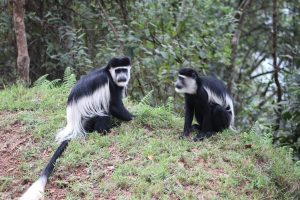 The Life of the Colobus Monkeys

They are very vulnerable to habitat destruction and are known to be hunted by common chimpanzees for food.

The diet of a colobus monkey consists mostly of leaves, which it can digest easily with its special, four-chambered stomach, as well as fruits, preferably those that are unripe, flowers, twigs, bark and soil.

They live in small groups, but most spectacular about it is its High jumping skill and the attractiveness of its black and white colours.

They are mostly found in national parks and forests.

Planing on a wildlife safari tour????

ugandatravelsafaris.com ready to take you through an awesome adventurous experience.