Our 5 Day Kampala Jinja Cultural Safari Experience has an opportunity to visit the Buganda Cultural Trail, religion, Ssezibwa falls, Mabira forest, and the source of the Nile as well as theWhite water Rafting Experience.

Meet and greet our safaris driver-guide. You will be transferred to your hotel in Kampala for dinner and overnight.

Your trip begins with a visit to Kasubi hill which inhabits the Kasubi royal tombs, a UNESCO world heritage site. Historically, Buganda Kabaka has always built their palaces on strategic hills to control the major roads to the palace, and always have easy ways to escape in case of an invasion or a rebellion. Upon the Kabaka’s death, his jaw bone was removed and buried at a separate site so as to maintain a shrine to keep his spirit a life according to traditional belief.

At Kasubi however, Muteesa 1 was the first king to be buried there after which it was labeled a royal resting ground for Buganda royalty with three other preceding kings buried at the site at present. The first structure on these premises was put up in 1881 with the original idea being Mutesa 1’s royal palace, he however expressed his desire to have the palace as his final resting place hence the tombs.

An onsite guide will brief you on the history behind each of the structures at this site, including the entrance each of which is of traditional importance to the kingdom.

Leave Kasubi and drive to the Twekobe – the official place of Buganda’s present king. It is here that the famous 1900 Agreement was signed between the Kabaka of Buganda and British colonial officials establishing the Uganda Protectorate. The palace was first constructed in 1885, on Mengo hill, by Ssekabaka Mwanga with the original architecture being the same as that of Buckingham palace then.

Whilst there you can view the largest manmade lake called the Kabaka’s lake. Mwanga who had a love for water sports intended to link the lake to Munyonyo where he would sail on some of his hunting expeditions.

Located just close by is the Lutiiko or Buganda parliament. In this particular building, the Kabaka and his cabinet of ministers often meet to discuss and implement important matters pertaining to the kingdom.

After lunch, visit to the Uganda museum, which originally began operations at Makerere University in 1942. The museum was later shifted to Kitante and was officially opened by Sir Apollo Milton Obote in 1962 on Uganda’s first independence which premises it has retained to date. The museum is an important ethnological site with different sections all of vast historical importance.

You will also visit the independence monument an imposing work of art that shows a woman standing firmly on the ground with her legs slightly parted, wrapping all over her body, hoisting a baby in the air whose hands are raised in triumph. This monument tells the story of Uganda’s independence.

Visit the Kololo independence grounds which double as an airstrip at the same time. It’s at this site that the Union Jack was let down in 1962 and the Uganda flag was raised for the first time.

Your trip begins with a visit to Namirembe cathedral. The cathedral is located on Namirembe hill, which name traditionally translates into full of peace with this particular location being a historical gathering for celebrating war victory. With Bishop Alfred Tucker’s establishment of the offices of the Diocese of Eastern Equatorial Africa in 1890; Namirembe cathedral was opened in 1892 as the official headquarters of the Anglican Church in Uganda which position it holds to date.

You will then proceed to Rubaga cathedral which was first constructed in 1889 by the catholic white fathers after Mwanga donated a piece of land on Lubaga hill for this cause. Presently the hill is the headquarters of the catholic archdiocese in Uganda and inhabits a hospital and school all run by the same diocese.

Drive to the beautiful Bahai temple in Kikaaya and admire its beautiful architectural setting. An onsite guide will also avail information on this religious sect and will also readily answer any of your questions.

After lunch, proceed to Uganda Martyrs’ shrine Namugongo a memorial in honor of 25 catholic and protestant martyrs’ who were massacred for their faith under the orders of Ssekabaka Mwanga who was King of Buganda at the time; and whose word was the law at the time of his reign. Namugongo was historically a place for punishing individuals that disobeyed the Kabaka.

These young men whilst following their religion had become rebellious in the eyes of the king who believed he was supreme and even God was not above him. Some of the martyrs were chopped to pieces while the rest were burnt alive reason for the putting up of both catholic and protestant shrines in Namugongo in the honor of these saints. 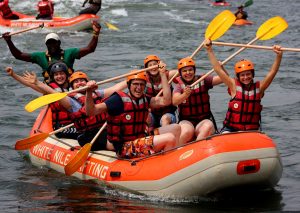 Day 4: Ssezibwa falls, Mabira forest, and source of the Nile

Leave Kampala at 7:00 am and drive along Kampala Jinja highway past Mukono reaching Ssezibwa falls. This fall is said to have been delivered by a woman, one “Nakangu” and are said to be twins. This is an important cultural site for the Buganda kingdom. You will inspect a couple of caves and shrines onsite where the locals go to pray for blessings and wealth.

Leave Ssezibwa after breakfast and drive to the Mabira Ecotourism site. An onsite guide will brief you on the importance of the forest and will take you on a guided nature walk. Whilst here, you will view lots of important tree species, forest specialists (birds) and even some monkeys.

Our rafting spree will begin at 8:00 am. Experience the best grade 5 rafting in the world. You will come across lots of interesting waves like the Club wave, Cool Wave, Big Brother, Itanda, and many more. Carry a little extra money to purchase photos of your rafting experience since personal cameras are not allowed. Wrap up this beautiful day with a barbeque at the end of your rafting spree, after which you will drive back to Kampala reaching in the evening